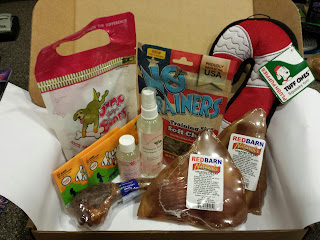 Ahhhh! I think I'm crazier about dog subscription boxes than I am about the human ones! I currently subscribe to Barkbox for my pup and LOOOVE it, but a couple of weeks ago I stumbled upon another doggie subscription called Happy Dog Box, along with a 50% off coupon for my first box. A month-to-month subscription is $25 so the coupon brought this down to $12.50. The longer the subscription, the lower the cost per box (the longest sub is 6 months for $21/month). Happy Dog Box is great because they select high quality goodies that are healthy and sourced in USA, Canada, or Australia (nothing from China). As much as possible the treats are wheat, soy, corn, or gluten free as well.

I brought my dog with me on my mail run and when I pulled the box out of the mailbox he must've smelled something he liked because he would not leave it alone. Imagine walking a block with your dog jumping up every five steps to get a sniff and constantly staring at you with huge expectant eyes the entire time. Yes, he almost walked into a wall because he was so focused on me and not where he was going. And no, he didn't learn from it and he kept staring.

When I opened it up I was thrilled! SO MUCH STUFF!! I was supposed to get a February box but it may have had some leftover December items in it because there was a candy cane toy, but I'm not disappointed. My pup doesn't discriminate between seasonal toys, and the rest of the stuff was great for any time of year. 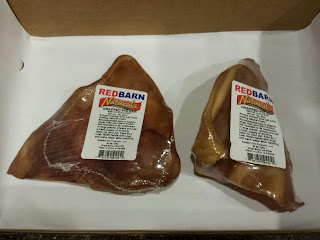 I read the label and noticed (and chuckled) that even though there was a huge difference in the size of these ears, both were marked as 0.56 oz. Which one is correct? Either I scored and got extra for my money or I got gypped and got less. Oh well, not that I mind very much anyway. When Macho saw two ears in his box, of course he decided to snatch up the larger one. I've only given pig ears to Macho once or twice before and I recall them being kind of greasy, but I let him have one anyway -- after making him work a little for it of course:


I meant to take it away after he was about halfway through. For the first 15 minutes he kind of just nudged and licked it so I walked out to do something else since it'd take a while. Sneaky guy then decided to eat reeeally fast and devoured the entire thing before I got back. It made him uber thirsty so he then drank a crapload of water and chose to immediately pee it all out. In his pen. In the house. Bad dog. 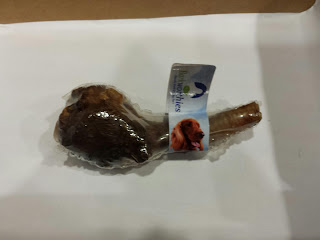 I've never heard of pork rose before so I looked it up and it's actually the trachea and larynx of a pig, a.k.a. a pig's voice box. Ech! Well I guess it can't be worse than pizzle. As long as he doesn't start oinking. It's supposed to be a good source of chondroitin which promotes good joint function. This was the first thing the animal picked up from the box of goodies. Probably looked super duperly juicy to him. However, I don't allow him to unwrap chews because he likes to eat the wrapper as an appetizer then chew on the main dish. No, Macho. No to wrappers. 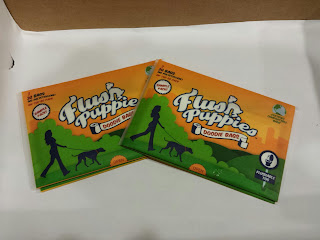 Cute idea, especially for those who live in a condo and don't want to stink up the apartment with a poopie bag in the trash. These poop bags are certified compostable so your doggy can save the earth, too. While the bags do decompose on land, they're made to biodegrade in water, hence Flush Puppies. They are a bit on the expensive side at roughly $0.15 per bag, so I'll have to see if it's worth my cheap butt spending the extra money for the sake of being green. I admit, I have kind of a massive ecological footprint. But I am kind of curious to see how quickly it'll disintegrate and if I can see it in action (nerd alert!), but I first have to stop giggling at the idea of my dog's poopie going in the human toilet. 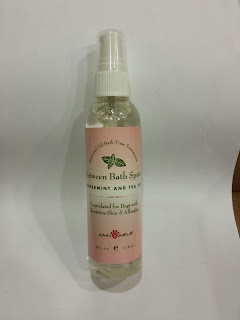 I'm lazy when it comes to Furbutt's bath time so you'd think I'd use in-between bath sprays like crazy, but for some reason I don't. I'm guessing it's because I'm too lazy to even spray him. I bought an in-between bath spray a while back and received another as part of a gift basket, and I haven't used up either of those, so I don't know when I'll get to this one. But it does smell very clean and minty. 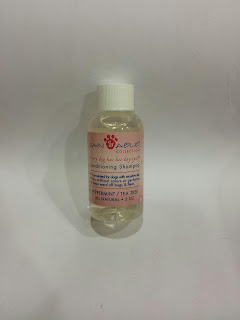 Okay, confession time. I haven't bathed my dog myself in about a year, ever since the first time he went to the Petco groomers. This is probably my most expensive bad habit. It's just that Macho absolutely loves bathing there because the groomers just adore him. And he adores them. (And it saves me the trouble of a wet shirt and slippery bathroom floor complete with an all-natural fur carpet) Maybe one day I'll suck it up and bathe him myself again, and then I'll let you all know how this shampoo works. Smells mighty clean, though! 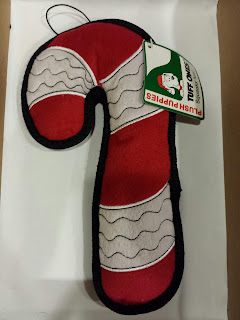 This is the only Christmas-themed item in the box. It's a squeaky candy cane from the Tuff Ones line of Plush Puppies by Kyjen. Tuff Ones are made of a canvas-like material that is almost impossible to rip. The seam stitching is also really thick and Macho has never been able to tear one apart. He normally loves squeaky toys but I guess he knew there were treats galore in the box so he didn't care about the candy cane. Very food-oriented creature that one. 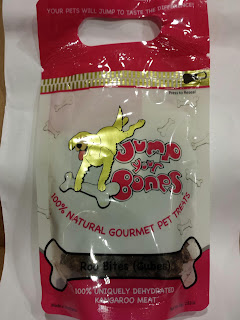 One of the reasons why I love pet subscription boxes is because you get to try treats that you'd never buy in the big box pet stores, mostly because they don't carry a very large variety of meat...flavors? Macho just got alligator in his January Barkbox (he loves it by the way), and now he gets to try kangaroo! These all-natural bites look like they're freeze dried and are soy and gluten free. I can't wait to give these to him, but he already has like 5 bags of treats open at the moment so he'll have to wait. Spoiled guy. 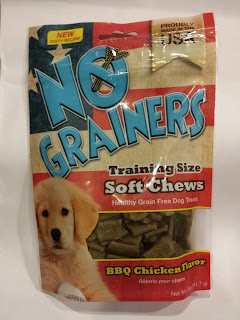 Even though I swore I wouldn't open more bags of treats until we use up the opened ones, I couldn't resist cause, well that puppy on the bag! "Pweeze open, yes?" Besides, once I picked it up Macho would not leave me alone. I take one step, he follows. Stop, he stops. One more step, he follows. And each time he sat there with perfect posture and a big goofy grin. So I let him have a piece -- after humiliating him a bit with a balancing act. Just as I figured, he loves it. It smells yummy. If it didn't know better I would've taken a piece too. These training bites are wheat, corn, and soy free so they're suitable for dogs with grain allergies, too.

I am very impressed with this month's Happy Dog Box. It had a total value of $36.17, about 3x what I paid for it. Even if I didn't receive the promo and paid the full price of $25, it was still an excellent value. They promise 4-6 items in each box, but we received a total of 10 items! I don't know if it's a marketing ploy to keep us subscribing for another month, but if it is it worked.

However, I may have to stop for a while after the next box because my Barkbox renewed for another 6 months while I was waiting for this one to arrive, and two pet boxes is way too much for my chubby pup. I was hoping this one would get to me in time for me to decide which to continue and which to stop, but timing wasn't on my side. But if Happy Dog Box continues to pump out awesome boxes like this, I think I might have to to give them a chance with a 6 month subscription after our Barkbox runs out (Sorry, Barkbox, we still love you though!).

And for the part you probably went through this entire post looking for: If you think this box sounds pawsome, use my link to get 50% off your first box. That comes out to only $12.50 for tons of doggie fun!


Note: I was not compensated for this review. All opinions are 100% my own.